Owner of highly successful ALTA-WIDE TIMBER MARTs in Vegreville and Sylvan Lake, and Stettler TIMBER MART, all of Alberta, 33 year old Mark Brumm’s self confessed passion is retail. His career in the retail hardware business began at 15, with a part-time job at the Beaver Lumber store in Kingston, Ontario which he held while completing an Honours Degree in Marketing and Business Administration. That led to a stint at McLaren: Lintas Advertising in Toronto, where Brumm worked on the prestigious General Motors account. His little secret was that he was still traveling to Kingston each weekend to work at Beaver Lumber. After a lot of traveling, and much reflection, he decided that his interest lay in retail, and that he had the heart of an entrepreneur. Brumm left Ontario in 1998 for a partnership position with a Beaver Lumber operation in British Columbia. Less than five years later, Brumm bought his first store in Vegreville, which is close to his wife Lisa’s family. 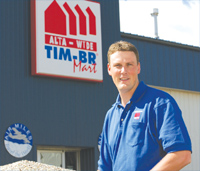 The Vegreville store had a tired look when Brumm bought it – a fading orange Do-It Centre sign graced the exterior while inside, the breadth of assortment was small and the mix uninspired. Never one to take half measures, Brumm gutted the entire store, added new fixtures, doubled the number of sku’s to 7,000 and replaced the whole exterior with the TIMBER MART look.

When Brumm took over the Sylvan Lake store, it was bleeding significantly. At 52, its owner had neither the experience nor energy to deal with the new competition. Brumm devised an innovative way to gain equity in the business. He offered his aggressive buying power, management and merchandising services in exchange for 50 per cent of the profits and a future deal to purchase the building, land and business. The offer was attractive to the owner; after all, 50 per cent of a profit is better than 100 per cent of a loss. In the seven months that Brumm was involved in the store last year, he reversed the losing trend, turning a profit.

The TIMBER MART in Stettler had lost considerable 6-figure dollars in 2004. Unable to turn the store around, its owner approached Brumm. The two negotiated a deal similar to that of the Sylvan Lake store, and Brumm began the turn-around process on that store on June 1st, 2006.

Brumm is now consolidating the store’s buying functions, and through his partnership in TIMBER MART is aggressively negotiating with suppliers for the kind of deals that will allow him to compete with the big box centres, and become even more profitable.

Brumm believes that staff needs to be stakeholders in every store’s success, and he encourages them to take part in solving problems. He also offers staff bonuses, with the result that some staff earn up to two months wages in year-end bonuses. Brumm also takes a “win-win” approach to customer service, balancing the need to provide great customer service with his obligation to protect his own relationship with his staff. A highlight of the customer service strategy in Vegreville is the “two per cent referral program”. Brumm sends follow-up letters with “referral cards” to customers who buy substantial building material packages. Along with his thanks for their business, he offers to give them two per cent of any sale he makes on customers referred by them. That means Brumm has “thousands of silent salespeople out there that only have to be paid when they bring in a sale.”

Brumm’s background in advertising means he understands the importance of advertising and branding. It is fitting he is a member of the TIMBER MART National Marketing Committee.